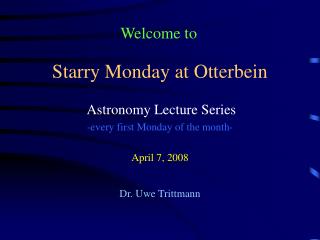 Welcome to. Starry Monday at Otterbein. Astronomy Lecture Series -every first Monday of the month- April 7, 2008 Dr. Uwe Trittmann. Today’s Topics. Dark Matter and Dark Energy – The Dark Side of the Universe The Night Sky in April. Starting Point. She Walks in Beauty By: Lord Byron (George Gordon) - She walks in beauty, like the night of cloudless climes and starry

Starry Night Vincent Van Gogh - . the stars ch 14 the sciences. astronomy, the study of objects in the heavens, was