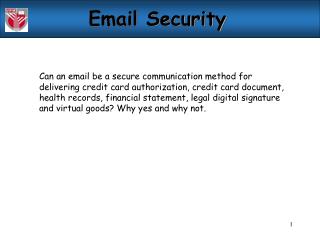 The death of email has been greatly exaggerated - Email marketing. is it on its deathbed; an ancient channel that has no

Safety and Security in Malls - . problem. what is safety and security? what do they use? what the jobs consist? go over

Lecture 5: Security, PhP - . getting started in unix overview of php and html php basics php and databases postgres and