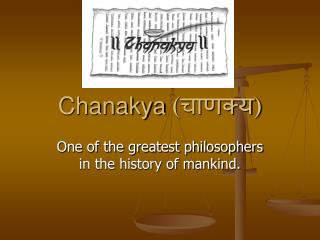 Chanakya ( चाणक्य ). One of the greatest philosophers in the history of mankind. General Information. Born around 350 BC and died around 283 BC Name at birth was Vishnugupta but was later known as Ch ā nakya and Kautilya A soldier of Christ - . by chanakya sehgal. coverage. feet shod with the preparation of the gospel of peace. shield of