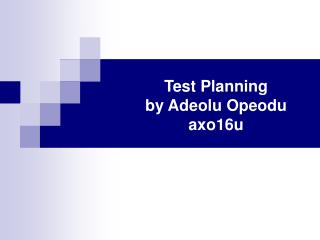 Test Planning by Adeolu Opeodu axo16u. Defining the scope of the presentation. 1.0 What is software Testing & its objectives? 2.0 What is Testing Planning? 3.0 What to Test? 4.0 Which sources to use for test cases ? 5.0 Who will carry out the test? 6.0 The test environment

Retirement Planning - . who should be the beneficiary of your ira?. lewis w. dymond, jr. wealthcounsel, llc. retirement