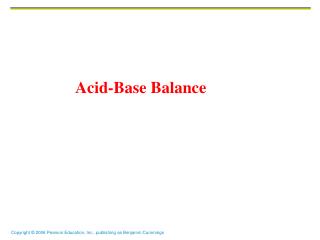 Oxidation-Reduction Reactions (Redox) - . what is the difference between acid/base reactions and redox reactions?.

Relative Strengths of Organic Acids and Bases - . background knowledge for today: proton based definition of an acid is?

Acid-Base Balance - . acid-base. acids are h + donors. bases are h + acceptors, or give up oh - in solution. acids and

Acid base imbalance - . objectives. define the terms acidosis and alkalosis. how to do blood gas interpretation explain

Acid-base Balance and its Disorders - . prof. dr. meltem pekpak. for optimal functioning of cells. acids and bases in the