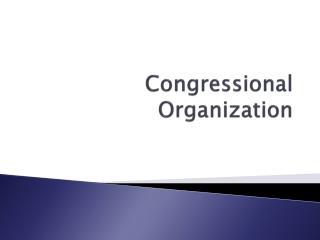 Congressional Organization. Announcements. Extra Credit on Gerrymandering Extended to Monday, October 24 Starting next Monday you will be turning in a synopsis of a US/World event that relates to class (more directions to follow later this week)

How Congress is Organized - . chapter 5 section 2. terms and sessions. the constitution requires congress to meet at

Organization of Congress - . powers of congress. enumerated powers article i section 8 broad and general “provide for

The U.S. Congress - . the united states congress is composed 535 elected representatives who travel to washington d.c. to

Congress - . chapter 12. the representatives and senators. the job salary of $145,100 with retirement benefits office

How Congress is organized - . ch.8 sec.3. a law is born. how a bill becomes law a bill is proposed by a representative in

Organization of Congress - . sscg 9 and sscg 10 ch.5. we have a bicameral legislation – two houses of representation.

Chapter 5 The Organization of Congress - . i. congressional membership. jeanette rankin, a republican from montana, was