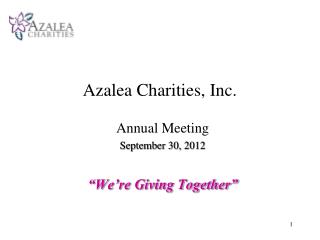 1.1 version 2 - Scottish charities, the law and the regulator an introduction to the scottish charitable sector, the

“Initiative to bring local communities together and raising the profile of local charities” - . get involved…. and

3.4 version 1 - Making changes to a charity: 2 a guide to the charities reorganisation (scotland) regulations 2007 for

Giving back to our local charities - . community spirit means when a group of people working together to help improve the

Small Business Resource Power Point Series - . promotion by donating to charities. decisions you must make. decide on a

in the [Insert Race] on [date] - . or contact [insert name] for more info at : [insert your email address] [insert your