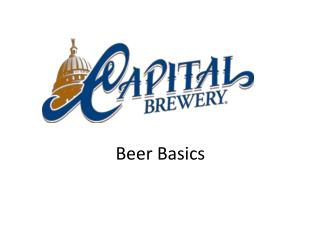 Beer Basics. Beer and the Civilization of Man. Brewing can be dated back to at least 7000 BC. Many archeologists believe beer was the catalyst which led to the civilization of humans. What is Beer Made Of?. Water Beer is between 90-97% water depending on the style!. Malted Barley

The Basics - . elements, molecules, compounds, ions parts of the periodic table how to name. classification of elements.

Psychopharmacology Basics - . an important aspect of treatment of emotional disorders is with psychotherapeutic

Beer The Favourite Drink - Beer is the most known drink since a long time. news world india's recent survey has shown