The usage of IT at English lessons - PowerPoint PPT Presentation 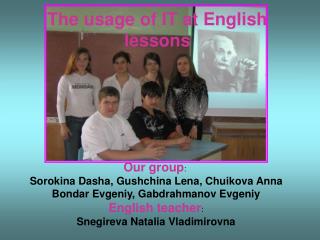 The usage of IT at English lessons

The usage of IT at English lessons

Academic English - . how to create a language-rich environment for the benefit of all students by megan o’reilly 2011.

ENGLISH COURSE: LESSON 1 - . tutor: gerard j. hannan jerry. all about me my name is gerard hannan and i am from limerick

Lesson 3 : Sentences According to Function HR-TOD : English Business Writing Class - . kinds of sentences according to

Motivational tools to increase the use of English in the classroom - . by heidi witt-williams. workshop outcomes. by the

WELCOME TO OUR ENGLISH LESSON - . tell what you did yesterday. let’s repeat the verbs in the past Caesar’s English I - Place these directions in a page-protector and keep in your binder. for odd-numbered lessons:

Common English Grammar and Usage Problems - . someone forgot their grammar. it was a lesson for he and i. the first of

English Teaching Methodology - . lesson 1 what you should know about english teaching?. reference books. techniques and