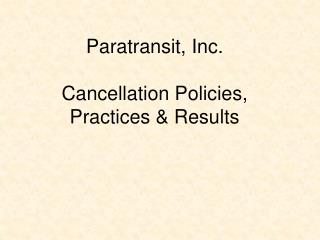 Paratransit, Inc. Cancellation Policies, Practices & Results. Characteristics of Cancel Types. Timely cancels make up more than 2/3 of all cancels, and typically are only effected by changing the length of the call-in period Cancellation - . why we should terminate our threads cleanly?. neverends. ( at least) two threads are created: first

Security Policies and Procedures: Principles and Practices - . chapter 2: the elements of a policy. objectives. create a

Paratransit ITS - . june 2, 2010. how to increase efficiency and improve customer service with technology presented by