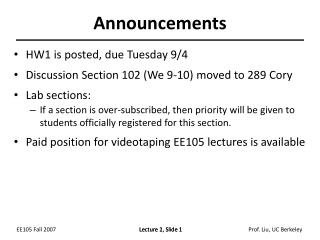 Announcements. HW1 is posted, due Tuesday 9/4 Discussion Section 102 (We 9-10) moved to 289 Cory Lab sections: If a section is over-subscribed, then priority will be given to students officially registered for this section. Paid position for videotaping EE105 lectures is available.