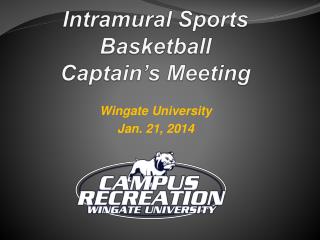 2009 APG MILITARY INTRAMURAL SPORTS CALENDAR - . *there must be at least four units signed up for a season or tournament

Intramural Basketball Program “Mechanics” - . pre-game conference. do not overlook this important aspect of the game

Intramural Theory - . definitions. intramurals - the phase of a schools physical education program that is geared to the