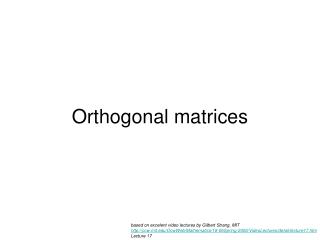 Orthogonal Transforms - . fourier. review. introduce the concepts of base functions: for reed-muller, fprm for walsh

Chapter 9 Eigenvalue, Diagonalization, and Special Matrices - . &lt;definition&gt;. a real or complex number is

1.1 Matrices - . both a and b are examples of matrix. a matrix is a rectangular array of numbers enclosed by a pair of

5.1 Orthogonality - . definitions. a set of vectors is called an orthogonal set if all pairs of distinct vectors in the

Systems of Equations and Matrices - . chapter 5. 5.1 systems of equations in two variables. solve a system of two linear