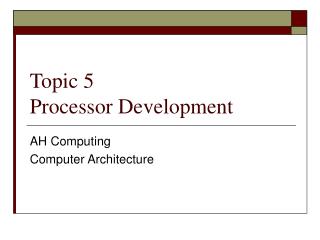 CSCI-2500: Computer Organization - . processor design. datapath. the datapath is the interconnection of the components

Why this topic? - Race and racial identity as influences on school achievement jacquelynne eccles university of michigan

6GEO3 Unit 3 Contested Planet Topic 5: Bridging the Development Gap - . what is this topic about? . ‘bridging the