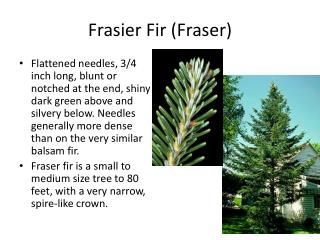 Frasier Fir (Fraser). Flattened needles, 3/4 inch long, blunt or notched at the end, shiny dark green above and silvery below. Needles generally more dense than on the very similar balsam fir . Fraser fir is a small to medium size tree to 80 feet, with a very narrow, spire-like crown. FIR - . the financial information return is a set of schedules that are required to be filed for the ministry of

FIR Filters - . fir filters have transfer functions of the following form:. the impulse response is. this impulse

Fraser Ali - My self. fraser ali. my family. i have a mum and a dad ,my dad is a cop and my mum is a hair dresser. my mum