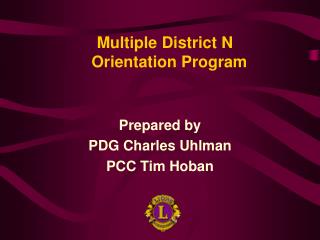 Multiple District N Orientation Program. Prepared by PDG Charles Uhlman PCC Tim Hoban. Instructions. There are three games. Do ONLY one game at a time. Keep your score for each game After game 3 calculate total score. Begin Game 1. Each correct answer is worth 10 Points. Prepared By: - The study of distribution of genes in populations and of how these gene frequencies are maintained or

Prepared by - Department of pedodontics. how to reach a diagnosis. in pediatric