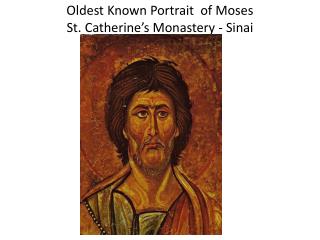 Oldest Known Portrait of Moses St. Catherine’s Monastery - Sinai. The Promised Land in the time of the Judges. The Fragmented World of the Judges. Most of the Book of Judges is spent on six foreign oppressions : 1.      MESOPOTAMIAN 2.      MOABITE 3.      CANAANITE 4.      MIDIANITE Bedouin wilds of Sinai - Bedouin tribes guide hikers through the untamed wilderness of the nile valley in sinai, egypt,

The Torah - . what is it? why is it so important to the jewish people?. introduction. the torah is the sacred text of the

ISLAM The True Message Of Moses, Jesus and Muhammad (Peace Be Upon Them) - . nabil abdus-salam haroun. contents. chapter

At Vlatadoun monastery in Thessaloniki - . church of st. paul in thessaloniki. inside the church of the transfiguration