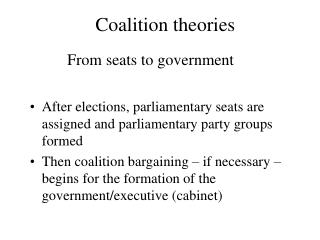 Coalition theories. From seats to government. After elections, parliamentary seats are assigned and parliamentary party groups formed Then coalition bargaining – if necessary – begins for the formation of the government/executive (cabinet). Parliamentary coalitions.

Coalition-Building - . civil society laws: experiences and expertise 24 - 25 may 2008. the international center for

May 19 at 10:00 a.m. Presented by the John Burton Foundation &amp; California Coalition for Youth - Runaway and Rational Choice Theory - . hassan ibrahim . what is it ? . well rational choice theory is a one of the four main

First Suburbs Coalition - . capitalizing on our assets finding solutions to common concerns working together. what are