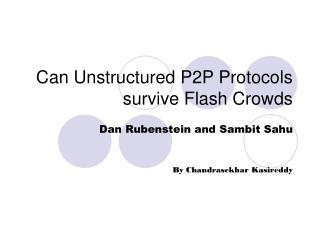 Flash Distillation - . flash distillation is the simplest method of separation. a feed stream is “flashed” into a

Applied Cryptography - . spring 2014. protocols. protocols. what is a protocol types of protocols ( arbitrated,

What is a P2P system? - . node. node. node. a distributed system architecture: no centralized control nodes are symmetric