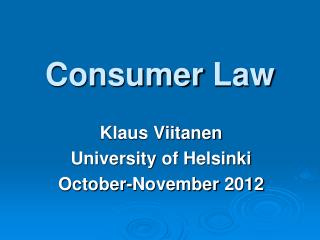 Consumer Law. Klaus Viitanen University of Helsinki October-November 2012. 1. INTRODUCTION. The main aims of these lectures 1) to give an overall picture on different legal instruments used in consumer law , especially in EU consumer law and in the Nordic countries I. CONSUMER LAW - . 1. consumer = one who buys goods and services from a seller . 2. contract = legal agreement to pay

Florida Consumer Law Center, P.A. - Florida consumer law center prides itself with the experience of our team – over 50