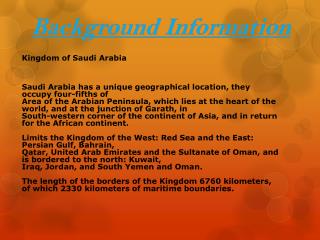 Background Information - Directions: watch the video and fill in the blanks. an english song. warm-up questions.

BACKGROUND INFORMATION - . 61 children , diagnosed as dyslexic by educational psychologists, were given the sunflower

Beowulf: Background Information - One of the most important remains of anglo-saxon literature is the epic poem beowulf.

Background Information on the Eve of the Civil War - . north vs. south. set up your notes…. using a ruler, divide your

Background Information: - Changes in the frequency structure of echolocation clicks across behavioral states in southern

Highlights and background information - . international marketing: green marketing and sustainability as a tool for

Master of Science Health Services Management - . current issues in health services management question 1 what are the