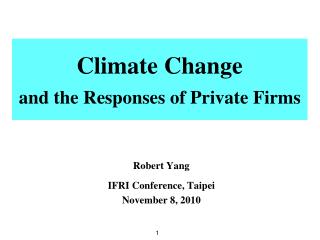 Climate Change and the Responses of Private Firms

Climate Change and the Responses of Private Firms. Robert Yang IFRI Conference, Taipei November 8, 2010. Industry in Climate Change Mitigation: How Do We View Them?.

Climate Change and the Responses of Private Firms

U.S. National Security - . inside the white house (continued). roles of the president. head of state head of government /

INTRODUCTION AND OVERVIEW OF THE CHARTER AND THEMATIC WORKING GROUPS - . abdul sattar yoosuf, who mylvakanam

REGIONAL PRIORITIES TO IMPROVE THE BUSINESS CLIMATE IN SEE - . regional reality check on progress in policy reforms and

Chapter 23: Sustaining Terrestrial Biodiversity - . rangeland and pasture 29%. how is land used?. no nation has set aside

Externalities: Problems and Solutions - . externality externalities arise whenever the actions of one party make another

ENVR E-115 Sustainable Development - . introduction to the economics of sustainability november 13, 2007. how much does

An overview by the RCN Policy and International Department - ‘hard truths: the journey to putting patients first’ the