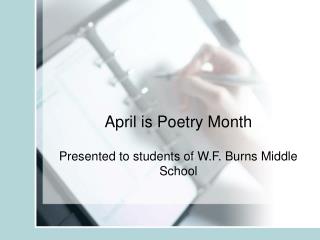 Poetry Poster Project - . groups: you will create and present your poem to the class with an innovative poster. be

Students of the Month - . good character is for all!. respect. during the month of september, the character trait taught

Poetry Project - . by kaitlyn barth. metaphor poem. kaitlyn runs faster than a cheetah when it tries to catch it’s

April is… - . national poetry month. let’s learn about. haiku. what is haiku?. a type of poetry that doesn’t rhyme

Poetry project - . by: christopher rodgers. the train. i like to see it lap miles, and lick valleys up, and stop to feed

What is an elegy? - . using google, find out what an elegy is. write the definition in your book/word document for today.

Poetry Anthology Project - . by:carlee phillips. simile . flint an emerald is as green as grass, a ruby red as blood; a

Poetry Project - . objective: we will communicate the main idea of our research through a poem we write. roses are

Women’s History Month Opening the Door for Women - . october is women’s history month or as some people call it