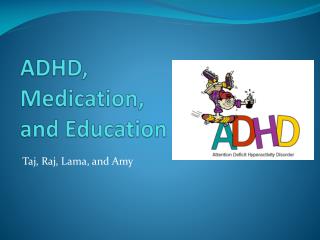 Attention Deficit Hyperactivity Disorder (ADHD) - . tips for understanding and managing adhd in the home presented by:

ADHD - . to start out, we just wanted to give you a picture of what we, as educators, are dealing with when we talk about

Attention Deficit Hyperactivity Disorder (ADHD) - . asia silver. meaning. adhd is one of the most common childhood

ADD/ADHD What is it and why it is difficult to understand - . this powerpoint has been created to help teachers

ADHD - . by evan, nat and jesse. what is adhd?. attention deficit hyperactivity disorder a neurodevelopmental disorder

ADHD and ASD: Everything you want to know about the A’s in School - . judith aronson-ramos, m.d.

ADHD - . by elizabeth mihalick. what is adhd?. attention deficit hyperactivity disorder (adhd) is one of the most common

ADHD - . attention deficit hyperactivity disorder. “a case study of a student with