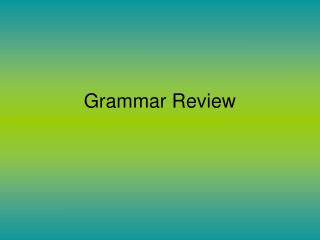 Grammar Review. Assignment. Skipping lines on one of your pieces of paper, name your favorite item. Include as many details as you can about it. What emotions does it invoke? What do others think about it? DO NOT STOP writing until I tell you to do so!!!. Parts of Speech. Pronouns

GRAMMAR REVIEW: Parts of Speech - . using the “my summer vacation” bulletin board, list all of the nouns, pronouns,

Grammar Review: Adverbs - . basic definition:. “an adverb is a word that modifies a verb, an adjective, or another

GRAMMAR Review - . day 2. warm up. identify the part of speech of each underlined word. sea mammals are some of the most

GRAMMAR REVIEW - . capitalization the first word of every sentence. the first-person singular pronoun, i

Grammar Review - . clause vs. phrase. clause: a group of related words with both a subject and a verb. may or may not be