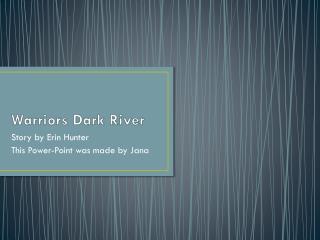 Mankind Episode 4 Warriors Segment Questions: - . 1. the vandals weren’t savages: they were educated and skilled in

Heart of Darkness - . an introduction. impressionism. why the blurriness?. for modern novelists, the messiness and

HEART OF DARKNESS - . “understanding the setting of the book”. i.- go to youtube and play the following video:

Mapping the Heart of Darkness by Joseph Conrad - . the story begins on the nellie , a yawl that is in wait on the

Heart of Darkness - . by joseph conrad. themes, preoccupations and concerns and symbolism. conrad and racism white

Vocab Treasure Hunt - . what do all of these people have in common?. they’re all word warriors!. it’s true! pirates,

Heart of Darkness - . a brief look at conrad’s life and works, themes and motifs in heart of darkness , and apocalypse

Erin Hunter - . by ellie dedrick. who is erin

River Valley Civs in China - . world history ms. guerin. by the end of this lesson you should be able to answer:. 1. why