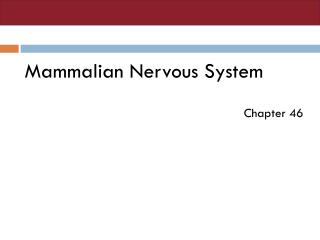 Chapter 46 - . grooming procedures. grooming skills in the veterinary facility. care of the external body lack of

Chapter 4 Anatomy of the Nervous System - . structure of the vertebrate nervous system. neuroanatomy is the anatomy of

Mammalian Characteristics - . chapter 20. lactation. presence of mammary glands for which the class is named. this is a