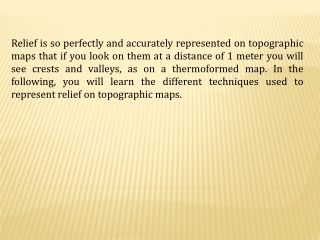 Relief is so perfectly and accurately represented on topographic maps that if you look on them at a distance of 1 meter you will see crests and valleys, as on a thermoformed map. In the following, you will learn the different techniques used to represent relief on topographic maps. Contour lines CONTOUR DRAWING - Anyone can learn how to draw by training coordination of hand and eye movements. contour drawings to

Contour Lines - . definition. a contour line is a line that passes through points having the same elevation.*.

Understanding Contours - . what are contour lines. contours lines - are imaginary lines that join points of the same

AIM : How do we draw contour lines? DO NOW - In your notebooks answer the following questions. when looking at a contour

What height is ‘Point A’ located at? - Last lesson recap on ‘contour lines’ answer the following 5 questions in

Elements of Poetry: - . an introduction for 4 th grade connections. lines and stanzas. lines. stanzas. single lines in a

Words Can be Art! - . now that you have learned about line and shape we are going to focus on using both, especially

Cross Contour Lines - . cross contour lines are drawn lines which travel, as the name suggests, across the form. cross

Depiction of Relief - . interpreting contours. contour lines are continuous lines on the map that join points of the same