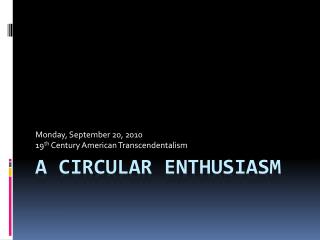 Enthusiasm - . in god. enthusiasm – in

Circular A-110 - . everything you didn’t want to know. purpose of a-110 subpart c- post award. establishes uniform

Circular A-110 - . everything you didn’t want to know. purpose of a-110 subpart c- post award. establishes uniform

ENTHUSIASM and INNOVATION! - . enthusiasm and innovation!. you see what you look for!. personal challenge. seek

Enthusiasm Creates Abundance - Check this presentation: enthusiasm creates abundance! brought to you by

Our Flagging Enthusiasm - . learning goal: to understand leunig’s feelings about patriotism and feeling a connection

Enthusiasm for Team Presentations? - . svetla tashevska. aim of this talk. to share experience about an informal action

A Circular Flow Diagram - . illustrate by means of a circular flow diagram, the product market; the resource market; the

“OMB Circular A-123 - . how does every manager get involved?”. philip j. giza. fms senior accountant financial