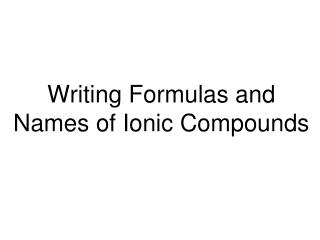 Molecular Compounds - . writing names and formulas section 9.3. objectives. interpret the prefixes in the names of

Naming Ions and Writing Formulas for Ionic Compounds - . monoatomic ions. defined as a single atom with a charge cation =

Topic: Writing Binary Ionic Formulas - Do now: an atom of which element has the greatest attraction for electrons in a

IONIC COMPOUNDS: Names and Formulas - . naming compounds in chemistry is called nomenclature. there are a few general

Writing formulas for multivalent ionic compounds - . transition metals have the ability to form more than one cation

Ions and Ionic Compounds Practice Quiz - Write formulas and show the charge for these ions:.