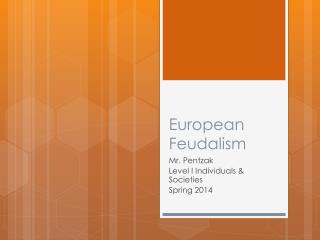 European Feudalism. Mr. Pentzak Level I Individuals & Societies Spring 2014. Bell Ringer 5/20 & 5/21. Please write your name, date, and block on the piece of paper I handed to you Please fill out the reflection sheet completely (three things per column)

The European Patent Office An introduction to the EPO and the European patent system - . sipo-ohim-epo joint seminar on

Feudalism and the Manorial System - . feudalism. europe after the fall of the roman empire turned to a system of small

The practice recommendations in this presentation are from: European Society of Cardiology - Source: guidelines for the

Experiencing European Feudalism - . experiencing european feudalism. you are members of european society during the