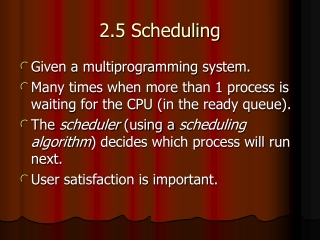 2.5 Scheduling. Given a multiprogramming system. Many times when more than 1 process is waiting for the CPU (in the ready queue). The scheduler (using a scheduling algorithm ) decides which process will run next. User satisfaction is important. Context switch.

Multimedia, Quality of Service: What is it? - Qos. network provides application with level of performance needed for

Advanced Streaming Format (ASF) - . by hung-chin wang. what is asf ?. an extensible file format be composed of one or