The 1935 Nuremberg Rally. Hitler addresses a vast crowd of over 100,000 at the Luitpold Arena. - PowerPoint PPT Presentation 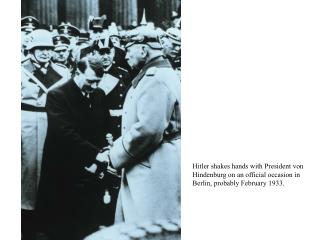 The 1935 Nuremberg Rally. Hitler addresses a vast crowd of over 100,000 at the Luitpold Arena. Hitler shakes hands with President von Hindenburg on an official occasion in Berlin, probably February 1933. Torchlight procession by units of the Nationalist organisation in Kiel on 2 February 1933, three days after the announcement that Adolf Hitler had been named as Chancellor.

The 1935 Nuremberg Rally. Hitler addresses a vast crowd of over 100,000 at the Luitpold Arena.

What I was Seeing - . the scca (sports car club of america) and nasa (national auto sport association). both have entry

Hitler and Nazi Germany - . adolf hitler. hitler was born in braunau am inn, austria, the son of a minor customs official

Amateur Radio and Performance Rally - . by kristopher marciniak – ki6iuc presented to soara. what is performance

ADOLF HITLER - . date and place of birth. adolf hitler was born on 20 april 1889 at the gasthof zum pommer, an inn in

Do Now - . in 3-4 sentences, explain why the league of nations failed in preventing world war ii. think back to

The Holocaust, Nuremberg, and the Creation of Israel - . presentation 4. the holocaust. hitler believed that germans were

The Nuremberg Laws - . what rights are most important to me?. from echoes and reflections curriculum. the nuremberg laws.