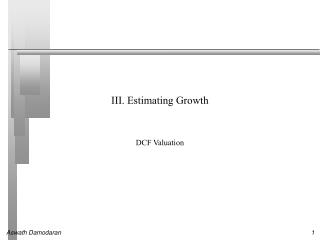 III. Estimating Growth. DCF Valuation. Ways of Estimating Growth in Earnings. Look at the past The historical growth in earnings per share is usually a good starting point for growth estimation Look at what others are estimating

Annual Growth, Catch Up Growth - It matters little what else they learn in elementary school if they do not learn to read

PLANNING AND ESTIMATING - . prologu e. there is no easy solution to the difficulties of constructing a sw product, a