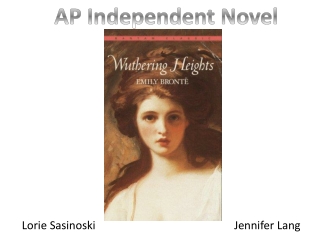 Symbols of Light and Dark in Wuthering Heights - . beware of binary opposites!. the forces and figures of darkness are

Wuthering heights - . our extract: pg 288 to 291. reader’s point of view. we’re inclined to feel sympathy for

Wuthering Heights - . out on the wiley, windy moors we’d roll and fall in green. you had a temper like my jealousy: too

Wuthering Heights - . “he's more myself than i am. whatever our souls are made of, his and mine are the same” ~cathy.

Do Now - . what do you know about the victorian period in england? what images are called to mind when you hear the word