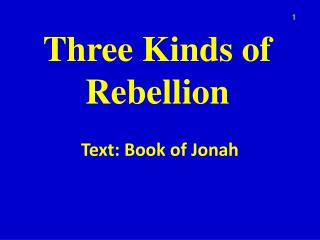 Three Kinds of Rebellion. Text: Book of Jonah. Rebellion = resistance to authority Mt. 28:20. Theme – Mercy of God Purpose – To show the love of God and the fact that God wants all to be saved Key Word - repentance. Book of Jonah. I. Jonah’s disobedience – 1 II. Jonah’s prayer – 2 Three Kinds of Rebellion - . text: book of jonah. theme – mercy of god purpose – to show the love of god and the fact

Three kinds of dependence - . “in” a is in b = a ontologically depends on b. i.e., a exists only because of b . think

THREE KINDS OF MEMORY - . episodic generic procedural. what is memory?. process we use to remember knowledge or skills

Three kinds of agenda setting: - . focus of this talk is on who or what sets the news media agenda . most studies so far

Three kinds of causal claim - . it works somewhere : t contributes to r somewhere (e.g. in some study population). it

There are Three Kinds of Rocks - Igneous rocks granite | basalt | pumice |obsidian . there are 2 kinds of igneous rocks:

Swords of Rebellion - . www.kevinhinckley.com. man from poland, explaining to his attorney why he wants a divorce. q: do

Rebellion - . recap . so if you remember the government was exactly fair how so?. robert gourlay. scottish canadian went