The Nun Study: Past, Present and Future - PowerPoint PPT Presentation 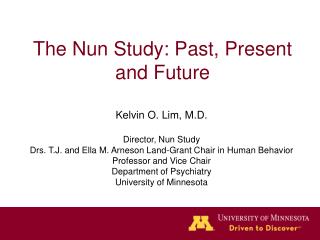 The Nun Study: Past, Present and Future

1 / 37
Download Presentation
The Nun Study: Past, Present and Future
247 Views

The Nun Study: Past, Present and Future

Middle East as “shatterbelt” - . “a large, strategically located region that is occupied by a number of conflicting

(Q. 2) How do we organize society? - Hinduism class and caste karma &amp; moksha the 4 paths of salvation the 3 debts

Colombia - . project-a journey without frontiers. between a cluster of 5 schools in london and 5 in medellin british

Review of Scalar Meson Production at = 7TeV in CMS, U(1)' Gauge Extensions of the MSSM and - Calorimetry for future

The Heritage of the Middle East - . what to look for in the unit:. islam was the third major religion to come out of the

Buddhism Review Project - . by: patra, quinn, kyle, andrea and ken . essential questions. what is the human

The Judgments of the Torah - Towards an understanding of the authority yeshua gave peter to bind and to loose. 18 then