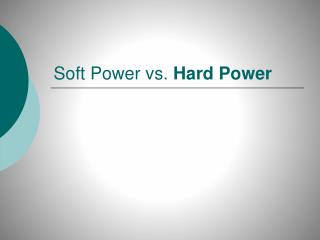 Soft Power vs. Hard Power. Definition of Power. Hard power plays an important role for international relations. A → B (to make B do what A wants) Coercion - (sticks) Persuasion - (carrots) Incentives Soft Inquiries vs. Hard Inquiries - As you know, credit inquiries are divided into two categories: hard inquiries and

Hard skills vs Soft skills - The best comparison between hard vs soft skills. in this article, we will give you all the

Instrumental vs Influential Power - . sort the list below based whether they exert influential or instrumental power.

Salty, Hard, Soft - Write up : please use the appropriate levelled vocabulary in your evaluations . assessment

Protocol Design Concept: Soft State vs. Hard State - . soft state: a state is refreshed periodically, and if it is not

Power BI Vs Tableau Vs Qlik Vs Demo - We have compared four top bi tool and reviewed them according. learn more about