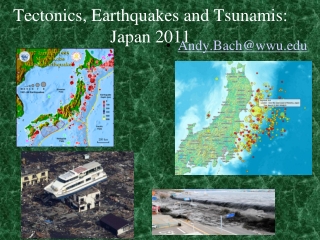 Plate Tectonics - . the driving force of earthquakes. before we can understand earthquakes and their effects, we need to

Chapter 18 - . volcanic activity. lesson 5. volcanoes: the basics. think about it…. what happens when you shake a can

Tectonics unit quiz - . for each of the following questions decide which is the best or most appropriate answer a, b or

Volcanoes and Earthquakes - . weak spot in crust where molten material (magma) comes to the surface. what is a volcano?.

Chapters 10 &amp; 11 - . tsunamis. what?. what is a tsunami? what triggers tsunamis?. a massive volume of seawater in

Tsunamis - . oceans 11. what is a tsunami?. tsunamis are defined as extremely large ocean waves triggered by underwater

Tsunamis - . by josh c. kieran stephanie kayleigh adam . what is a tsunami?. a tsunami is a wave that grows bigger every