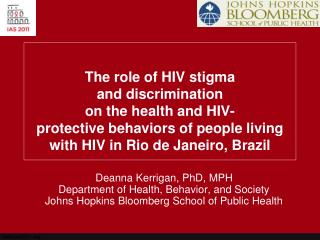 The role of HIV stigma and discrimination on the health and HIV-protective behaviors of people living with HIV in Rio de Janeiro, Brazil . Deanna Kerrigan, PhD, MPH Department of Health, Behavior, and Society Johns Hopkins Bloomberg School of Public Health. DEPARTMENT OF HEALTH - Mpumalanga province. department of health. budget hearing may 2002. vision:. is a caring and

Funded and endorsed by the Department of Health - Epic2: national evidence-based guidelines for preventing