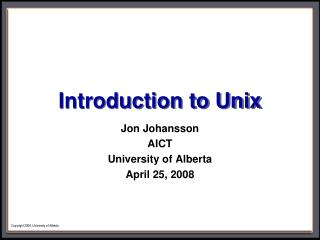 UNIX - . jehan-françois pâris jfparis@uh.edu. why unix?. first os that was portable was written in a “ high-level

unix - . unix is a layered operating system. the innermost layer is the hardware that provides the services for the os.

Introduction to Unix - . sendmail. sendmail. it's been said that you aren't a real unix system administrator until you've