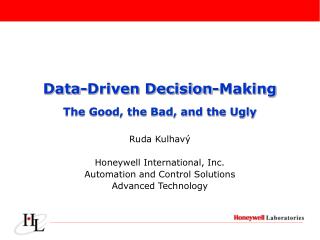 Data-Driven Decision-Making The Good, the Bad, and the Ugly Ruda Kulhav ý Data-Driven Decision-Making The Good, the Bad, and the Ugly Ruda Kulhav ý

Building a Personal Brand (Follow the Good, Avoid the Bad, and Prepare for the Ugly) - . bill peeper, ceo (retired),

6.1 Introduction to Decision Analysis - . the field of decision analysis provides a framework for making important

Progress Monitoring and Data-Based Decision Making - . participant outcomes the participants will be able to …. explain