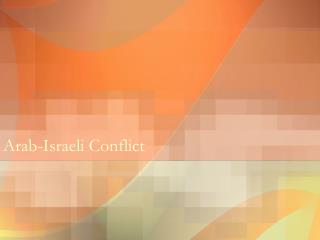 Arab-Israeli Conflict. The Palestine Question. The History of Palestine Originally Palestine had always been a disputed land Jews claim that Palestine belongs to them, a claim that goes back 3,000 years when the Jews ruled Jerusalem.

The impact of Israeli occupation on the Palestinian health status - . history of the palestinian – israeli conflict. in