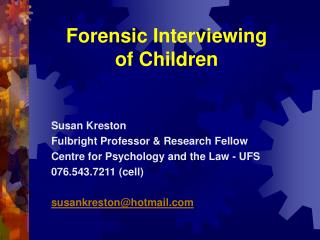 Forensic Psychiatric Perspectives of Children - . . overview. 2008- 2.11 million arrests of those under 182007-juveniles

The forensic evaluation of the emotional maltreatment of children - . jo tully vfpms seminar 2017. living with

INTERVIEWING CHILDREN WHO HAVE BEEN VICTIMS OF SEXUAL ABUSE: - Fpp birmingham april 2019. interviewing children who have

Interviewing - . presented by wctc career development services. interviewing. what is an interview? why learn about