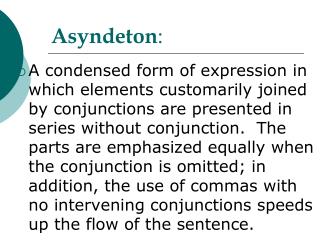 Terms to Know - . how style affects an argument. asyndeton. asyndeton- omission of conjunction between coordinate

Why do speeches use so much repetition? - . answer: audiences need time to process information. do authors really take

Conjunctions - . see text pages 163 – 165 for additional information. conjunction. a conjunction is a word which joins

Asyndeton - . a form of expression in which elements customarily joined by conjunctions are presented in a series without

Words to Know #1 - Rhetorical and literary terms. words to know #1. in writing or speech, the deliberate repetition of

Asyndeton and Polysyndeton - . use of conjunctions. a syndeton:. o mighty caesar! dost thou lie so low? are all thy

Style, Syntax and Structure - . ap language and composition. style, structure and syntax. syntax : the arrangement of

Rhetorical devices and their effects - . spotlight on allusion, asyndeton and erotema and hypophora . let’s review the