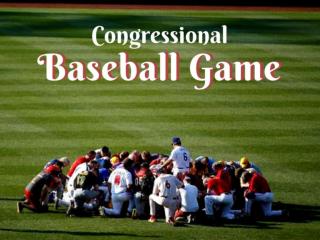 Democrats and Republicans took the field for the annual Congressional Baseball Game at Nationals Park, a day after a gunman opened fire on Republican lawmakers practicing for the ballgame. Baseball: A Complex Game - A complex game, written by david yorke, explains the complexity of the game of baseball and

Baseball Pre-Game/Post-Game Conference - . pre-game. your pre-game really begins when you get the

CONGRESSIONAL ELECTIONS “Rules of the Game” - . drawing of house districts --process for allocating each state its

Baseball: The Game of Statistics - . by: jenna hannoosh and katie higgins. math and baseball. math is such an important

Baseball Trajectories: A Game of Inches - . jim hildensperger kyle spaulding dale garrett. baseball: take me out to the

Congressional Process - . otherwise known a s how a bill becomes a law. here is one version.

Congressional Leaders - . congressional leadership is organized strictly by political party. so where do we start?.

Congressional Powers - . where congress gets their power. the constitution specifically outlines what congress can and

Congressional Committees - . what is a congressional committee ?. a group of representatives or senators assigned to