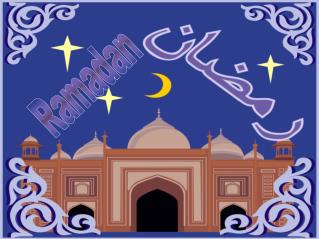 Ramadan. FASTING. Ramadan appears to be in the 9th month of the Lunar calendar, in which the Muslims fast for either 29 or 30 days. Advanced Programming - . rabie a. ramadan lecture 3. network programming an overview. a computer network is an

Amar KJR Nayak/IB/XIMB - . the globalization of markets. theodore levitt key concerns: how to customize products for the

Ramadan - . 9 th month of the muslim calendar (sha’aban). the month of ramadan is marked by the sighting of the new

GENERAL GUIDELINES FOR DIABETIC PEOPLE DURING RAMADAN - . outline. preparation for fasting the holy month of ramadan

Benefits of Fasting in Ramadan - . by umema khan 8c.

Driving Tips for Ramadan - Why be concerned?. too many road accidents occur every year during ramadan due to driver

Ramadan - . for islamic people all around the world this is…. a time for reading the qu’ran. a time for prayer. a