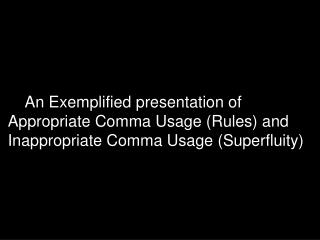 The SIX Basic Comma Rules - . thanks to a great book: the least you should know about english. comma rule #1. the

English 081 Types of Sentences - . four types of sentences according to grammatical structure the name for each type is

Even more comma rules!!!! - . commas!!!!!!. learning target. use commas accurately and effectively in our writing. 1.

The SIX Basic Comma Rules - . comma rule #1. the serial comma : place a comma between items in a series (three or

The five comma rules - . which rule is this?. my aunt, my dad’s youngest sister, is moving back to chicago. use commas

Comma Rules - . c’mon, you know you want to know how to use them properly…. sentence #1. i practice tennis in the

MY 4 COMMA RULES - . punctuation. dr. h’s 4 rules. since we will not be drafting letters or addressing envelopes since

COMMA RULES - . punctuation. commas. (1) use commas after the parts of a complete address in a sentence. the house number