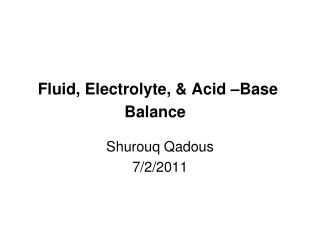 Fluid, Electrolyte, & Acid –Base Balance. Shurouq Qadous 7/2/2011. ANATOMY AND PHYSIOLOGY. Body fluid: As the primary body fluid, water is the most important nutrient of life. Although life can be sustained for many days without food, humans can survive for only a few days without water. Oxidation-Reduction Reactions (Redox) - . what is the difference between acid/base reactions and redox reactions?.