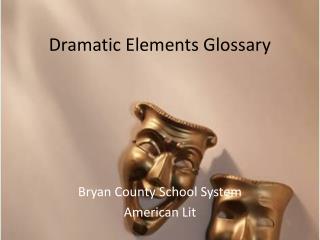 Dramatic Elements - . label your toc!!!!. exposition. information imparted by characters that helps to explain the

Dramatic Elements Premise - . when you write a story it needs to be about something. that something is the premise.

Literary and Dramatic Elements - . definitions and examples in romeo and juliet. what is drama?. a story that is written

Dramatic Structure - . please title a new page in the “literary terms” section of your notebook “dramatic

Dramatic terms - . a figure of speech that implies or states a comparison between two unlike things which are similar in

Dramatic Play - . what is it?. dramatic play- children take on make believe roles by themselves socio-dramatic play they

Dramatic Literature - . understanding dramatic literature and the art of theatre. masks of the italian renaissance